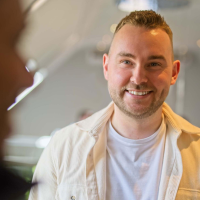 Just 9 months after joining the team as Digital Project Manager, we’re delighted to promote Hollie Bradbury to Head of Delivery.

Hollie Bradbury joined Kolodo in the summer of 2019, following roles mainly in content marketing for a couple of North West digital firms. Hollie’s most recent role before joining us was Content & Influencer Marketing Manager for We Influence.

Fancying a role change and a new challenge, Hollie took the role of Digital Project Manager with us, and quickly picked up not only the process behind large design and build projects, but also quickly built up an excellent relationship with our team and clients.

Hollie working with our team of digital experts in our Cheshire offices.

With the growth of our business, Hollie is now stepping up to manage delivery across all areas, including but not limited to, web and app design and build project, digital marketing contracts, and our Uniform offering.